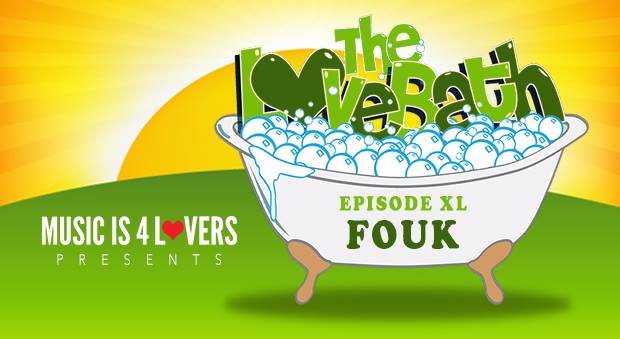 Pulling out the big guns for our 40th installment of The LoveBath here and we’ve invited the fine gentlemen of Fouk to contribute. Comprised of Dutch producers Hans Peeman (aka Junktion) and Daniel Lesseman, the pair have been blazing up the deep and disco underground scene for the last few years. With heavily lauded releases on Detroit Swindle‘s Heist Recordings, Brooklyn’s Razor-N-Tape Reserve and their own Outplay Records, this duo have been blazing a trail across the globe leaving nothing but ultra-funky tunes and sweaty dance floors in their wake.

On the eve of their forthcoming Butterfunk EP, I was able to catch up with the guys for a quick chat and a tasty mix.

Alright, so, for most people, we can assume that Fouk needs no introduction…but for the house-heads that have been living under a rock for the last few years….tell us a bit about yourselves and how you came to be music partners?
Well, we’re Daniël Leseman & Hans Peeman. We’ve been really good friends since high school. We started messing around with music at age 16, so we go we way back. Since then, we’ve always been making music either solo or together, Hans as Junktion and Daniël under his own name. Only after our individual studies did it start to become more than a hobby. We set up Outplay, our record label, as a vehicle for our own productions as we found it was difficult to break into the existing world of music. Four years ago the Fouk project was born and ever since our first tracks on First Things First EP in 2014, we’ve been doing quite well for ourselves 😉 Especially our Kill Frenzy EP on Heist Recordings… that opened a lot of doors for us!

Is there a clear division with your studio process? I’ve seen some clips of y’all at work and they always seem to have Hans at the helm and Daniel at the keys….any insight?
Daniël is the most skilled on keys of the both of us, he’s quicker at laying down some nice chords and improvisation, but Hans plays as well. We don’t have a fixed way of approaching a project. Sometimes we each make some ideas for a track individually and build on those bits, other times we start a project together in the studio. The process of bouncing ideas off of each other and getting inspired by them has been most beneficial to our workflow.

Let’s talk more about your label, Outplay Records. What was the inspiration to launch that and what can we expect for it’s future?
When sending out demos back in the day it was difficult to get our music listened to or picked up by labels. We had been thinking about starting a label for a long time so, when the opportunity arrived, we said ‘let’s do it!” At first, we only released digitally, but somehow it felt a bit lacking for us. We got a lot more satisfaction once we started releasing on vinyl. The feeling of a physical product, being able to hold it, together with printed artwork is just the best.

We have the first full Fouk EP on Outplay coming up in mid- November called Butterfunk EP, we’re really happy with this one! We wanted to broaden our sound, so it has become quite a varied EP. After that, we have an EP by Harry Wolfman lined up, which we’re also really excited about of course;)!

Anything else you care to share? here is your chance to plug, plug, plug!
We contributed a track to the upcoming No Dough – Just Cookies Part 4 double 12” V.A. on Times Are Ruff with other great artists such as, K98, S3A, Liem & Eddy Ness and Times Are Ruff themselves. Keep an eye out for The Round Up Part Four on Heist Recordings around the end of this year… remixes galore!

And we’re working on a couple of other remixes at the time of writing this. Of course we’re already busy on our next EP, no details to share about that just now 😉

Number one, sure-fire party-starter in your dj bag(s) currently?
We’ve gotten a lot of great promos in our inbox lately. Bigges Dj’s, it’s a new project/label from Sweden. A lot of fun and guaranteed dance floor fire! But also the upcoming Nebraska EP on Heist is a definite party-starter. 🙂 We featured a track from both EP’s in the mix!