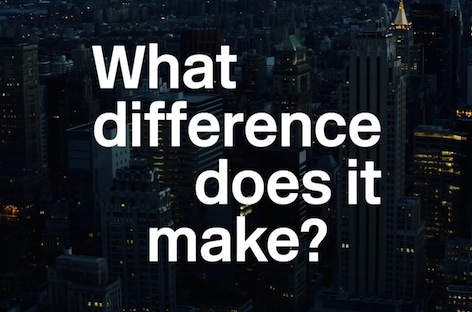 What Difference Does It Make? A Film About Making Music

Last night in over sixty cities around the world, at 8 PM local time, Red Bull Music Academy premiered What Difference Does It Make? A Film About Making Music. Shot in New York at the 2013 Red Bull Music Academy by award-winning director Ralf Schmerberg and his Mindpirates artist collective, the film grants unfettered access into the minds of some of music’s most revered. It’s chock full of memorable sound bites from such eminent musicians as Brian Eno, Nile Rodgers, James Murphy and Richie Hawtin, as they wax poetic on living a life of music.

What Difference Does It Make paints an inspiringly insightful picture of the lives artists lead, the challenges they face, and their complete surrender to the creative process. In a way, Seth Troxler’s screen time perfectly encapsulates the duality of the film itself: he is relatable and raw when letting out a pained laugh as he talks about the loneliness that comes with being on the road, but cut back to him a few minutes later and it’s all space and horses and A Clockwork Orange again. To that end, What Difference Does It Make is an earnest and honest look at both realms in which an artist must reside- the reality of the world around them, and the fantastical one that exists only in their mind, with an abundance of ideas and imagination constantly bursting at the seams.

A must watch for music makers, music lovers, and creative types of all kinds, the film can be streamed and downloaded for free HERE or below.

“Music is nothing but sound waves contolled by angels.” – Leroy Webb