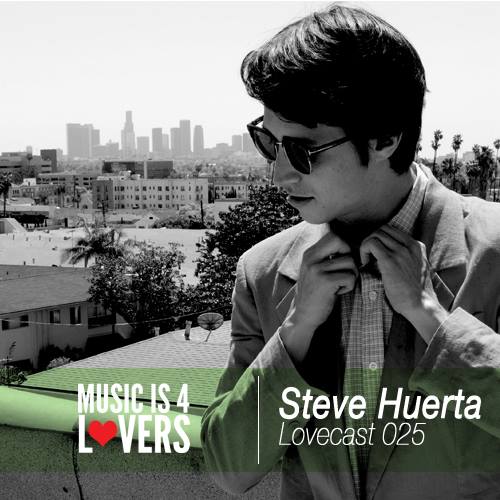 Many artist biographies begin by describing the producer/DJ as being on a “warpath”, grinding their way to the top. Steve Huerta fulfills and surpasses this typical notion, riding a line between the underground and the Beatport charts with his highly polished sound. His signature style harkens back to house music’s roots while maintaining a deep, modern sheen. With support from the industry’s biggest acts, Steve Huerta’s tracks can be heard in clubs, festivals, and warehouses all over the world.

Steve broke into the scene in 2012 with his noteworthy releases on LA-via-Montreal based Amadeus Records, run by friend and frequent collaborator Urulu. His two releases “Take Me Closer” and “Can’t Let Go” were supported by heavy hitters like Catz n’ Dogz, Sinden, Droog, Homework, KRL, Broke One, and Waze & Odyssey, among others. “Can’t Let Go,” a collaboration with friends and label mates Prince Club, was featured on highly influential media sites such as XLR8R, and Gotta Dance Dirty, and received repeated radio play on LA’s legendary KCRW.

Huerta’s forward-thinking productions in 2012 paved the way for a fruitful 2013, with chart topping releases on major deep house labels. “Do Good To Me” released on Miami’s petFood was the first of Huerta’s chart toppers. The EP broke into Beatport’s “Top 10 Releases”, with the title track shooting high into the “Deep House Top 100”. Soon after “Do Good To Me,” his anticipated “Things I Didn’t Mean” EP with Urulu was released on Berlin’s highly respected Dirt Crew Recordings. The title track “Things I Didn’t Mean” rose to #7 on the Beatport Deep House charts, remaining in the “Top Ten” for several weeks. The bona fide hit was among the top 50 most charted tracks on Resident Advisor for two months in a row, and was included on best of lists for Earmilk and DJ Mag. The single also graced the airwaves of BBC Radio 1, Ministry of Sound Radio, and Ibiza Global Radio.

With releases scheduled on Avotre (Berlin), Sccucci Manucci (London), and Culprit (Los Angeles) Steve Huerta hasn’t slowed down on the journey to the top of his game. Don’t sleep on this up-and-comer.

I grew up in south Orange County, but now live in Los Angeles.

Umm… ha, well, I wouldn’t say there was really a “scene”, granted that I grew up in the depths of suburbia. But in high school I was into playing rock n’ roll type stuff with my little brother and some close friends. Guitar and drums were what first got me really into music.

LA has really healthy music scene that includes all kinds of new and interesting styles. You can find pretty much any type music you want on any given weekend somewhere in town. In terms of house music, I really believe that it’s on the up and up. Lots of DJs and producers are re-locating here at the moment, and there seems to be a new party series popping up just about every weekend. There’s been a strong underground presence for house & techno for a while now, but it’s also cool to see some “hollywood-style” clubs like Sound Nightclub pushing really dope lineups on Friday nights.

I started working on production towards the end of college, mainly because I wanted to score more DJ gigs. It was more of chore at first, because learning the software was so tedious. But once I got the hang of it, and felt like I was progressing, it kind of took over my life, haha. I locked myself in my shitty bedroom studio and got lost in Ableton for about a year, with hardly any gigs during that time. Everything I enjoyed about playing instruments in a group, became that much more apparent when I could do all the instruments myself on my computer, ha. So ya, I’ve been producing seriously for about 2 and half years now.

When I signed my first EP to petFood, I thought, “Okay, this might go somewhere”. Then when the release came out and it shot up into the top 20 of Deep House on Beatport, and was getting charted by some of my favorite DJs, I was like ok, LET’S DO THIS! haha. But even now, with the progress I’ve made in the last year, its still tough to make a living do this, and I’m constantly keeping my fingers crossed, and working harder than ever.

Being new and young to the scene, do you think that your age has effected the way labels and other artists treat you?
I think being young can initially create certain limitations and underestimations. But it really just comes down to your craft. If you make really dope music, then people will give you respect, and see you as influence in the grand scheme of things. In fact, once an artist earns that respect, I think that being younger plays in their favor. I mean look at the wonder kids we call Disclosure. Their music really speaks for itself, but for marketing purposes, it doesn’t hurt that they have baby faces.

I’ve really liked the stuff on Aus Music this last year. They always have great club tracks that I either like right away, or grow on me eventually. Hypercolour has been a favorite for a while. I feel like they’re super selective with their artists, but their releases always push boundaries of house and garage, always super fresh sounds. Large Music, Morris Audio and Tsuba have all been killing it as well!

How does it feel to receive such an amazing response to your tracks?

It’s really the best feeling ever! Being creative always involves taking risks and, at times, can be a very self-conscious and neurotic process, especially when you work by yourself. Getting validation is really an amazing feeling. I am so grateful for all the support, and its totally inspiring me to make better and better music!

You recently played a desert party… Do you prefer to play in club settings or in the middle of nowhere?

Both can be great for different reasons, and I don’t think that one is inherently better than the other. I feel like a great party is 1/2 the venue & sound, and 1/2 the vibe & people.  Playing at Desert Hearts totally hit this sweet spot, but I had just as much fun playing at Monarch, SF recently.

What advice would you give to aspiring producers ?

Create a sound that comes natural to you and that you truly enjoy. Don’t follow trends because trends come and go. Don’t be afraid to geek out when it comes to learning production. It’s very technical work and taking short cuts can reflect negatively in your final product. Also, finish your tracks! It’s easy to make a cool loop, but much more difficult to create a polished track. Each track you finish will be better than the last. Lastly, HAVE FUN.

I think Homework’s Hudson Square EP probably had the biggest impact on me as a producer. I kind of obsessed over that organic, soulful feel. It was electronic, and club friendly, but the instrumentation was so authentic sounding. It didn’t exploit ridiculous synth noises, but was just super real to me. Two years later, it has come full circle, as Homework is currently working on a remix of my original work!

I’ve been really enjoying recent LPs from Boards of Canada, Different Marks, and the new Classixx album is just wow! I’m a huge Radiohead fan as well, so the new Atoms for Peace has been getting a good deal of playtime. Other than that I’m either tuned into LA’s KCRW, 93.5 KDAY or HOT 9.23 for the soul & rnb classics!

I have a big single with my buddy Yooj coming out soon on a super dope new Berlin-based label called Avotre. The track is called “Make Me Bad” and will be released with a massive Darius Syrossian remix! Also, Prince Club and I teamed up for remix of Climbers, which will be out the first week of July on Culprit. Lots of other surprises for the rest of the year but you’ll have to wait and see…

What are you most looking forward to in the coming year?

Probably most excited about getting out to Europe. I’ll be moving to London in October to embark on my first set of European dates!

I eat, drink, sleep Ableton. No hardware at the moment, but I do rely on some really amazing VSTs, and a massive sample library.

This is a pretty good example of the range that I would play. Some really melodic vibey stuff, some jackin’ old school house, and of course, a few originals. I hope it hits the spot 🙂