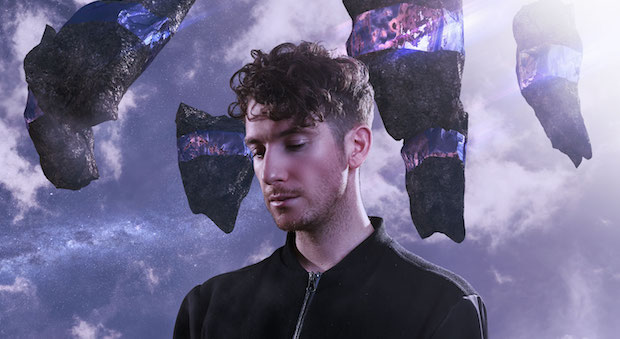 ABSOLUTE. is a burgeoning London-based artist and promoter who champions a diverse yet always dance floor ready sound. His ‘Mind Control’ EP will debut on Love Fever Records later this month, positioning him alongside renowned artists like Bicep, Citizenn, Kim Ann Foxman, and Jimmy Edgar on the legendary label. Music is 4 Lovers had the chance to sit down with ABSOLUTE. and chat about his background in dance music, running a long-standing successful club night, his new live setup, and more.

Introduce yourself for those that don’t know and give us some background. Where are you based, what got you into dance music?
I’m ABSOLUTE., based in London, but I grew up in a little seaside town in Devon. I’ve been obsessed with dance music for as long as I can remember. I used to hang out in a small record shop in Devon and pick up dance vinyl as a kid (with no where to play them!). When I was about fourteen, my Dad gave me some money for clothes and I realized, with a bit of haggling, I had just enough to buy a single old record deck. So, of course, that’s what I did (much to the annoyance of my parents) and my vinyl obsession continued. Because I only had one deck, I would listen to Pete Tong on Radio 1 and beat match to his show haha. Eventually I saved enough for a set and from there I bagged my first gigs locally and then started putting on club nights. When I moved to London, I continued to DJ. That’s when I met Larry Tee (who invented the genre Electroclash and started legendary NYC night Disco 2000) and we starting throwing underground mixed parties together, before launching my own night WUT? CLUB.

How long have you been into it before branching out to start producing? How long did it take to be happy with your sound?
I’ve been dabbling in production since I was young, but it was about 5 years ago I really focused my energy on it and things started to sound better. The first original release that made it out was Fairground, which came out last year, so that was a real moment when so many of my idols got behind it. I’m always striving to better my sound, but I’m definitely proud of that one.

What are your aims when making music, what do you think is your signature sound, do you try and get that across in each new tune?
It always has to stir an emotion, whether something more sombre or to straight up make you scream! I have one weird percussion sound that I literally put in everything, but the overall vibe evolves. It’s grown from being more serious and emotive dance music made in the box to exploring more analog and modular sounds. Also not always being super serious or moody, which definitely reflects my personality more, I’m pretty high energy when I DJ. Acid 8 is more lighthearted for example, it is dance music after all! I tend to make a whole batch of music with a similar vibe and then progress forward. I’ve been working on so much music so there’s lots more to come!

How has summer been so far? What has left you busy – do you have a job away from music?
Summer has been pretty mental, some highlights have been playing for Mixmag on both days at Parklike Festival and definitely putting together my live show. I just launched it at Milkshake Festival this past July. The set up is two vocalists, live strings, synths, drum machines, percussion pads, visuals and dancers inside giant inflatable LED pyramids, so its been a lot to work out!

Outside of DJing and producing, I run one of the UK’s most colourful mixed parties called WUT?CLUB, which has really exploded recently. It’s filled with the most sanely creative club kids and drag queens and we’ve caused a riot at XOYO, Ace Hotel, Moth Club and Dalston Superstore where I recently played with Krankbrother. We also launched our own festival stage at Milkshake Festival, (the biggest open minded dance festival in the world) last week, where I was joined by Heidi, Nimmo, Wax Wings, Larry Tee and 20 of London’s most insane club characters on the stage.

Do you make or play stuff that is warmer, more happy, in summer than in winter?
I hate winter but it does inspire some really interesting and dark, moody sounds. Usually though it’s what’s going on in my life at the time that reflects the music I make.

Does DJing and production have lots in common for you? Are you playing tunes you want to make and making tunes you want to play?
I do play a lot of my own productions in my sets, I like not being restricted to making music purely for that reason though, so there is some music I’ve written with the live show in mind that explores new musically territories and collaborations.

Tell us about the new EP you have coming on Love Fever. Where and when was it written, what inspired it?
I actually wrote the first version of Mind Control about five years ago, when I was living in a warehouse in East London. I updated it for the release when I was playing around with a TB303,  it samples the machine, then I played around with different patterns in Ableton and layered it with more sounds and effects. Acid 8 is one of those tracks that came about really quickly, it was something I made for the my sets and has been a staple since, it was the biggest track in my Parklike set recently.

What gear do you use, is that important to you or just a means to an end?
I’m obsessed with the Moog Sub 37 right now, which you’ll be hearing on some of my future releases, but Fairground was made completely in the box. I think the important thing is being creative with what’s available to you and having a strong work ethic.

Do you make music with certain labels in mind? Is this one tailored to Love Fever specifically?
I was definitely a huge fan of the label and admire so many of artists that are part of the Love Fever family, it’s a huge honour to be among those.

What do you make of the remixes? Is it weird to hear your own work remixed?
I loved the remix KDA did of Fairground, its such a banger, he’s a good friend and has been so supportive. I’ve returned the favour on one of his forthcoming tracks.

What else have you got coming up/are you working on?
I have two releases lined up with Weapons (Your Army’s label), I just heard the Black Madonna and Erol Alkin are both supporting my next release which I’m still getting over, and I’m in talks with a couple of other labels which is super exciting. On the remix front, as well as KDA, there’s one for my partner in crime Wax Wings and amazing new band Nimmo in works.