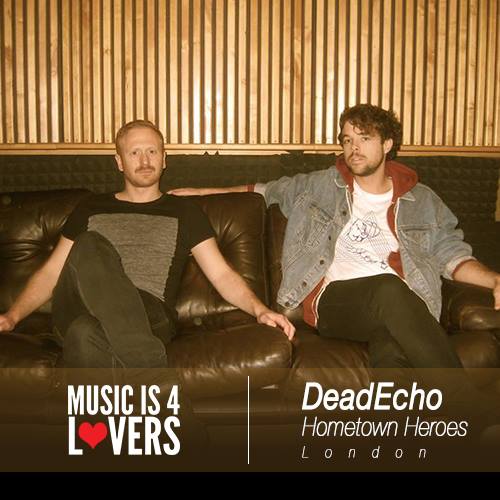 London’s bold, musical roots are no secret, nurturing some of the most innovative artists and leading styles of our time, and it is only fitting that our first international Hometown Heroes Podcast recognizes this thriving, cultural metropolis.  Rob Bradley & Adam Firman began their collaborative endeavors in 2010, meeting minds in the studio and on the decks as DeadEcho and extending their sound through Save You Records which, in the past year, has come to establish a community of innovative artists and genuine souls who explore the alternative depths of the musical abyss.  We caught up with these two upstanding gents and it went a little something like this…

Let’s begin, shall we? Where you are both from and how did you make your way into music?

R: I’m from Eastbourne, a small town on the South Coast, and I suppose I first got into music dancing to old Elvis Presley records on our old, wooden player with my mum and brother…Not sure if that’s what you were expecting, but in terms of electronic music, it was around 16 or 17, getting taken to my first rave in Brighton with Dave Pearce who is a legendary Radio 1 House DJ.
A: Always wore a hat, like me.
R: Yeah looks a bit like Adam actually-remarkable similarities-but that was really it. After going to one rave the bug had bitten and since then literally been playing for around 13 or 14 years now, so yeah quite a long time I’ve been into house.
A: I’m from Eastbourne as well and I’ve probably been into electronic music since the age of 16 or 17 and was originally into trance-Judge Jules on Radio 1 kind of hooked me then progressed to Seb Fontaine and went on from there. I would head to Brighton every weekend to go record shopping and used to throw parties out of my house with a collective of friends, and then did a couple of parties in Eastbourne which is where I met Rob.
R: Yeah, yeah but we really met at a DJ competition, and all you need to know is that I won.
A: But not really!
R: Adam won because it was based on the amount of claps and he had more friends there so quite a landslide victory, but he was playing CDs and I was playing Vinyl so we should definitely note that.
A: It’s true, and Rob was the person who encouraged me to get into artists like Luomo and Swayzak who we just had out.
R: I think when people first get into house they are drawn to what’s most popular and then slowly find what they like and that’s the best thing about electronic music- you go out and get influenced in various ways and I remember it was Luomo and Swayzak that brought Adam and I onto a different side of electronic music.
A: Yeah, started to encourage us to delve a bit deeper than the commercial airwaves and farther into the record boxes.

Amazing, so when did you start to collaborate together?

A: Not straight away, Rob was doing a night at a place called Funktion Rooms in Eastbourne which was a club that had a Funktion One Soundsystem and was the only good place to go, and I did a separate night there as well and we invited each other to play.  Wasn’t until a couple of years later that we started to make music together.
R: Yeah, Adam and I both had been DJing at decent London clubs like Turnmills, Cross, and Ministry of Sound and I went away traveling and came back and thought- hang on, I really want to give music a shot.  Had a friend called Carl Hannigan who worked for Ministry of Sound and had the knowledge of how to set up a label and it was really just a matter of giving it a go from there without much of a clue, seeking music from friends. Then started producing with Adam and after a year or so we began to take it quite seriously and I had asked him to join me on the label which kicked DeadEcho in gear. I do have to give Adam some props because he has the technical musical knowledge, went to proper school for it.
A: When Rob and I got together at first, we were fiddling with Ableton and didn’t have too much of an idea of our sound but it was really a matter of piecing together what we liked and finding that comfort point, and of course red wine had a lot to do with it.
R: Still does!
A: Yes, that’s our muse, but back to Save You…the truly exciting part of the label from the beginning in fact was not knowing what we were doing but learning everyday and making mistakes, granted some expensive mistakes, but from that you find the direction to head in and meet great people along the way, and it has all helped us to build what we are now. The label is essentially an extended version of a DeadEcho set, we strive to find innovators and people doing things a bit differently. What we play out is quite schizophrenic with so many different styles, but our sets are all unique in the way they are put together-quirky and different than the norm. I still think we are learning a hell of a lot everyday.

And now you are both based in London, throwing parties primarily at Basing House yes?

R: Yeah so each of us have our own sort of skill set I suppose and take on different responsibilities.  Along with Adam, we’ve got a third partner in Save You named Richard Hafez who could be called Chief Party Officer, and then my girlfriend Sara Shishkova does all the artwork and has really made the look as good as the sound over the last year. Right now in the music scene, you kind of have to cover all bases so we make music and have the label and parties truly fit alongside that. I was involved in a massive Spanish party called Cartuli’s Day and learned how to promote properly through that with a guy called Unai Trotti that brought 600 Spanish, Italian and less English heads to a proper underground warehouse and it was really great to do that for a year or so.
A: Yeah, hommage to Unai- that guy knows how to party!
R: Definitely, and we’ve always done little parties, started one called Dip 3 or 4 years ago and brought people like Ryan Crosson, Tim Xavier, Jay Tripwire played to like 150 people in a real dingy, Eastend bar.  Really it has only been in the last year that the label has gotten big enough to do our own thing, so now we are at Basing House bi-monthly.  It’s about 500 Meters from my flat so I can walk down with my record bag and it’s a great venue!  Around 350 capacity, great vibe every time, Funktion One Soundsystem, in the middle of East London which is right where you want to be, and we have hosted everyone from Kris Wadsworth to Swayzak so it links up with the label really nicely.

Is there any particular facet of London that inspires your taste and style as a musical outfit?

R:  The diversity in London is insane-there is any bit of music you could ever want nearly every night of the week.  It’s the people from all walks of life, most of my mates are from all different countries and that cultural immersion is by far the greatest inspiration.

What’s on the horizon for the warmer months?

A: Got Meadows in the Mountains Festival this summer and I will be waving the Save You/DeadEcho flag there for us while Rob is in Tokyo.  Shouts to Damo & Benji for throwing that too cause it is very unique and you meet loads of interesting, exciting characters so much looking forward to getting back to Bulgaria and celebrating my 30th birthday that weekend as well.
R:  Yeah as for the label, we got a nice, deep digital release from Ceri coming out in April and the next vinyl is a DeadEcho and Jay Tripwire EP with a Swayzak remix so we are really excited for that one.

And how about this mix?  Been really looking forward to listening.

R:  Think it’s safe to say that it is a bit insane! We kind of took the point of getting that big influence of sounds really, so there’s dubby techno, there’s drum & bass, there’s some weird electronica, tracks from the 90s and every decade…It’s weird, but it’s good!