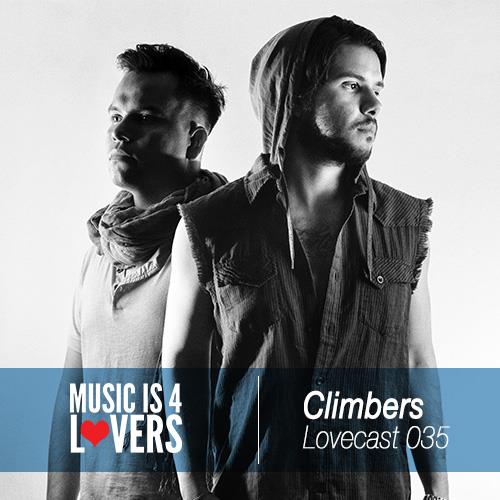 Climbers is the Mexicali duo, Jay Blakk and Kiko Deal, who, despite forming in 2011, have already been making serious waves around the world with a fresh-faced take on house music.Their debut ‘Law Of Attraction’ EP on Culprit, as well as the slew of buzz worthy remixes for labels such as Asylum UK, Noir Music 2 and Electronique have already found their way into the crates of some of the hottest underground dance acts including Art Department, James Teej, My Favorite Robot Tanner Ross, Miguel Campbell, Catz n Dogz, Death on the Balcony and Richy Ahmed. BBC Radio’s iconic Pete Tong has named them “Future Stars” earlier in September of 2013.

Though they come from different musical backgrounds, Blakk and Deal haven been friends since high-school. Early 2011 they finally decided to join forces to make music, and they haven’t looked back. 2013 saw further releases for Culprit, Get Physical, Turbo, and their debut North America tour.

Climbers’ are fast developing a signature sound: set to classic house percussions, empahitic electronic baselines, old school vocal sampling and atmospheric synth pads that are always pushing all the right buttons and are never less than memorable.Jay Blakk is the co-founder of Faceless Recordings along with Silky and Barber.

Can you tell us a little about Climbers and how you two linked up?
J: We are friends from High School, and we started going to rave parties together when all our friends didn’t want to go. We both supported each other on different musical projects we had back then, but we said one day, “ok, lets do it” while we were at my house sitting on the couch. Let’s just take one last shot and make something together, or just start working as lawyers.
K: It was a difficult moment in our lives, and music wasn’t happening for us yet, so after a talk in Jay’s apartment about it, we decide to form a project. Actually at the beginning I didn’t want to do it, I was so tired of trying and that day I went to his house to have a drink and say good bye to music… and here we are.
Being from Mexicali, how would you describe the scene there?
J: Well I think right now its in a transitional place, where people that love this are going to underground houses and some parties in clubs, but its going back to its roots. There was a moment where Mexicali had a big scene, and that gave us so much to learn from DJs coming to play here.
K: The scene is a back and forth thing, lots of ups and downs and now I think electronic music is more trendy, but you can’t expect anything.  We are next to the border, so sometimes the people that are really into the music prefer to go to the USA to party, but at the same time you can find a party with a super big crowd here, and two months later with no one there.
Coming from humble beginnings, what is it like now being so highly famed in the underground?
J: Well now that you ask, I remember playing at a house’s friend that was so kind to gave me his reception floor to play and there were times where it was a full pack house. There were some extraordinary after parties, sometimes even much better than the actual parties. It was the god old days; just 2 decks, 1 mixer and 1 yamaha big speaker for everybody to dance and one led 4 by 4 square changing colors, and it was magic. But that just reminds me that now people support us or take pictures with us is a blessing each day and we get to call this a job. I mean where we come from and what we accomplish is something I recall imagining in my room playing music, but now that I live it it’s much more special each time. Meeting all these incredible people around the globe and just being happy makes it so special.
K: I don’t know if I can describe us like “highly famed,” but I would like to say we are doing what we love and people are responding to that. Besides that, well it’s amazing!  It’s the result of years and years of hard work, and now we are just enjoying it.
Can you tell us a little about Culprit and how you linked up with them?
J: Oh men, that’s one of the best stories for us because when we started to really feel love for making our music together, the first thing I told Kiko was, “Bro let’s have our mindset and let’s ask the Universe to sign with Culprit,” and we did and our first ever EP with them. Let me tell you Andrei really has patience because I was unknown and I was persisting him to listen to our music which he did and will be always grateful for that.
K: Like jay said we sent our first demos to Andrei and I think he signed us because he saw something.  Since the beginning he believed in us and he gave us his full support. I remember he said you guys have the California sound, I think that was the x factor for us.
What other labels, are you really big fans of?
J: Well obviously each label we have signed with we are big fans of, if not we would not release.  Right now we are loving so much what our label is bringing to the table Faceless Recordings, also Innervisions not because of the music, but the state of mind those guys have to release and how they see the music industry. Also Life and Death and we love what Get Physical is doing right now and Culprit.
K: Innervisions and Life and Death
What would you say are your favorite attributes about each other?
J: I like that the guy is committed to be as honest as he can be on each note he hits and is very serious about perfection, and that he knows so much about music but stays humble about it and if you ask him a question about melodies, riff, or whatever to play, he is down to teach.
K: Jay is a really funny guy, he always make me laugh really bad, and he it’s a spiritual person.
When you’re not listening or producing house music, what type of music do you prefer to listen to?

J: Right now I’m digging classical music, I’m crazy about “Joe Hisaishi in Budokan – Studio Ghibli 25 Years Concert” wow and his track called Summer. I don’t know if its electronic or not, but I love whatever comes from Tycho that guy is such an incredible producer.

K: Depends on my mood, but I would say rock

What advice would you give to aspirin producers, and especially a group such as yourself?
J: Stay focus, believe in who you are, and specially remember that is not about making one million dollars or being the number one DJ.  It’s about who you had to become to obtain that million or  the best in what you are. It’s always about spreading love in your path and be grateful each day.
K: Don’t take drugs, stay in school kids.
Do you have anything special upcoming that we should know about?
J:Yeah we are super excited about a remix we did for Murk for their track called “Dark Beat” that was a monster in the 90’s and also we just finished a tracks with Clarian North that is so  special to us, cant wait to show it.
K: We got release on march with murk, the track is called “Dark Beat” and it’s a crunchy remix with a cool melody and some nice rhythm, a catchy one from the 90s classic.
Can you tell us a little about this mix?
J: It was made around BPM and we just wanted to put as much love as we could on this one and expression in it. I mean we did it and will be out on your page that the main theme is Lovers so i think you will hear it and get the idea straight away 🙂
K: It’s the compilation of experience and love from 2013, hope u guys like it .